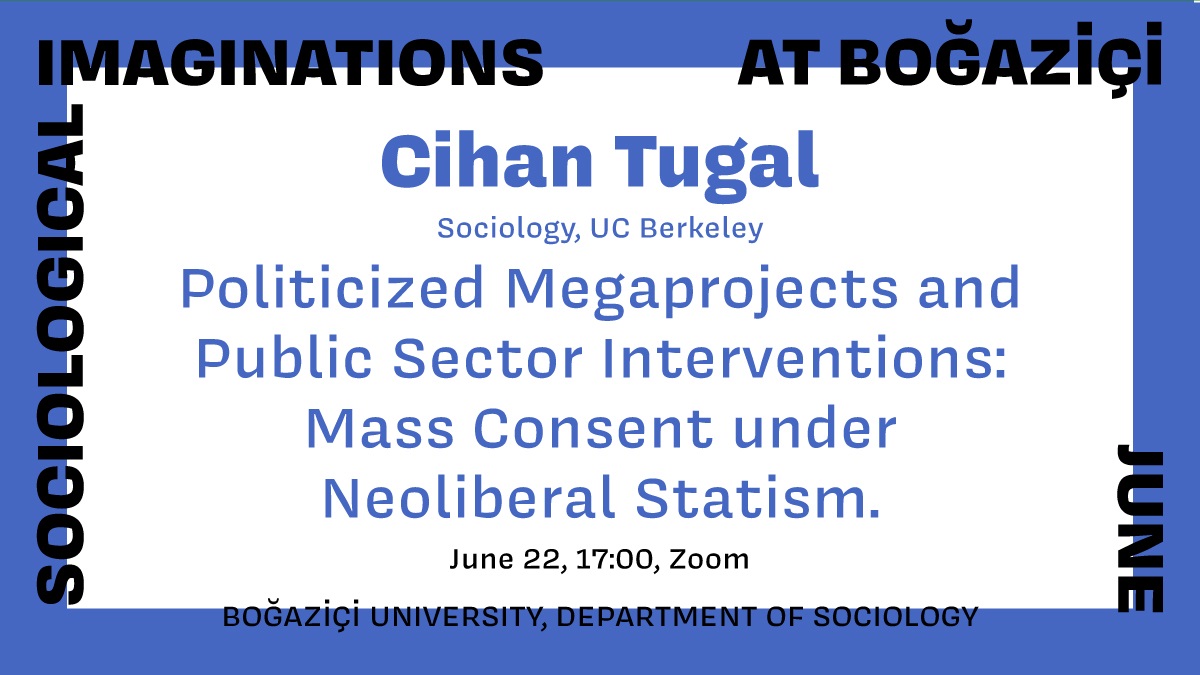 Megaprojects were central to job creation, mass housing, and legitimacy before their marginalization following the 1970s. They made an apoliticized, market-oriented, and less inclusive come back starting with the 1990s. Scholars have argued that megaprojects' turn away from issues of employment, and their focus on attracting tourists and professionals, are among the core traits of neoliberalism. Turkey, though once seen as a paragon of neoliberalism, problematizes this generalization. "Neoliberal statist" megaprojects have created jobs and residence for millions, and are at the core of popular consent for the Erdoğanist regime. Yet, this is not an idiosyncratically "Turkish," or even "emerging market," aberration. Trumpist US has also attempted a similar transformation, but failed. An analytical contrast with Erdoğanism demonstrates that some sociological factors so far underemphasized in the literature account for the frustration o f Trump's ambitions. Megaproject-driven growth and popular consent, however, are fragile in Turkey itself. Emergent market countries' turn to "neoliberal statism" is unsustainable, but does precipitate the end of the neoliberal era. Theories of megaprojects and neoliberalism need to be critically reconstructed to make full sense of these dynamics.

Cihan Tuğal is Professor of Sociology at UC Berkeley. Tuğal works on politics, economic change, and religion. His first book Passive Revolution: Absorbing the Islamic Challenge to Capitalism (Stanford, 2009) studied pro-capitalist Islam and its popularization among the poor. In his second book The Fall of the Turkish Model: How the Arab Uprisings Brought Down Islamic Liberalism (Verso 2016), Tuğal analyzed Islamic movements and regimes in Turkey, Egypt, Tunisia and Iran. His most recent book Caring for the Poor (2017, Routledge) discusses liberalism's uneasy relations with charitable ethics. He now explores populism and revolution in the contemporary world system.

4-Oppressive Generosity, Compulsory Guesthood, and the Politics of Hospitality in Turkey, Elif Babül 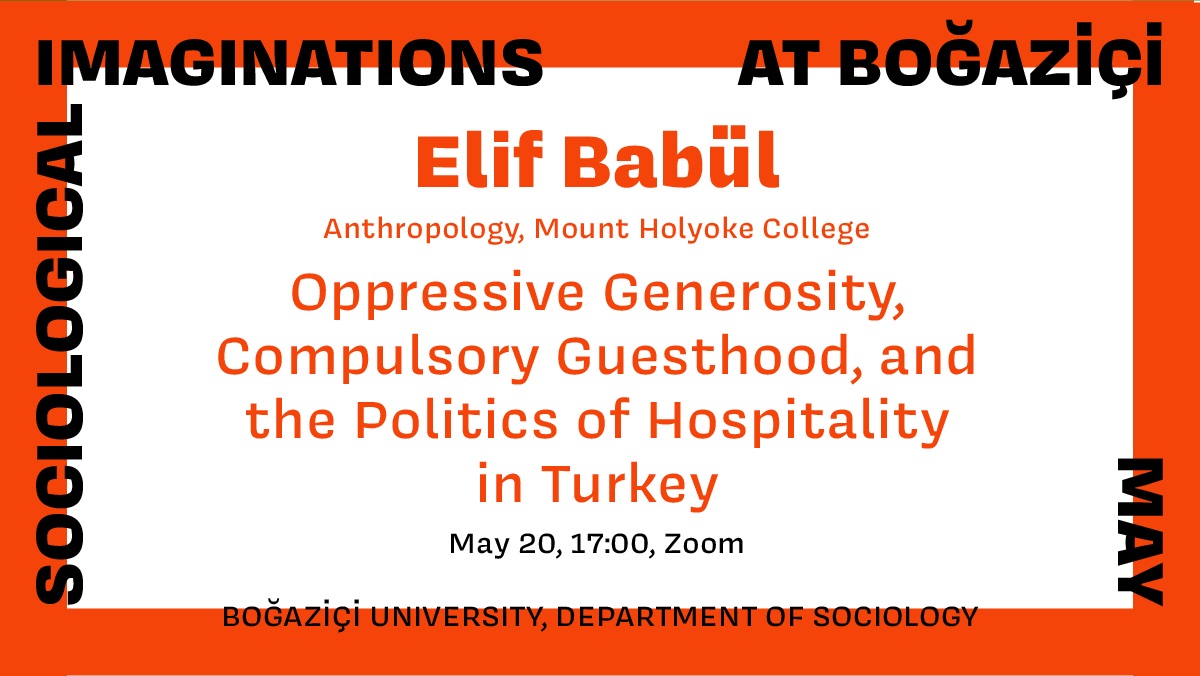 This talk explores hospitality as a key discursive framework for refugee management in Turkey by focusing on how the rhetoric of host-guest relations are operationalized at the official level to represent, interpret, and problematize the current state of affairs regarding the Syrian refugees, as well as to formulate policies for solving those problems. Host-guest metaphors are used to assert power and leverage both domestically and internationally by exerting sovereign control over a post-imperial nation-space, performing neo-imperial guardianship over the downtrodden (especially within the Muslim umma), and claiming an ethno-religious, civilizational morality that exceeds the legalistic logic of human rights and entitlements. In my analysis, I pay special attention to the notion of zorunlu misafirlik (compulsory guesthood) as a category that crosses over the realms of disaster management and refugee management, as well as sosyal uyum (social cohesion) initiatives that affirm the pla ce of immigrants and refugees within Turkish society by portraying the country as the historical meeting point of many cultures and civilizations and as the bedrock of tolerance and compassion. Despite widespread references to hospitality as a collective virtue of the Turkish nation, in the society-wide anti-Syrian sentiments, as well as the rhetoric that is employed in the government circles to offset those, one can trace the reverberation of late Ottoman imperial paternalism coupled with the essentialist vein of rising ethno-nationalism during the single party regime in 1930s.

Elif Babül received her PhD from Stanford University in 2012. A political and legal anthropologist, Babül’s primary specialization is in national and transnational bureaucracies and the politics of human rights in Turkey. Her research has been funded by the American Council of Learned Societies, the Social Science Research Council, and the Wenner Gren Foundation for Anthropological Research. Her work has appeared in the American Ethnologist, PoLAR, Social Anthropology, and New Perspectives on Turkey. Her book Bureaucratic Intimacies: Translating Human Rights in Turkey, published in 2017 by Stanford University Press, won the 2018 William A. Douglass Prize for the best book in Europeanist Anthropology; and received an honorable mention in the 2019 AAA Middle East Section biennial book award competition. 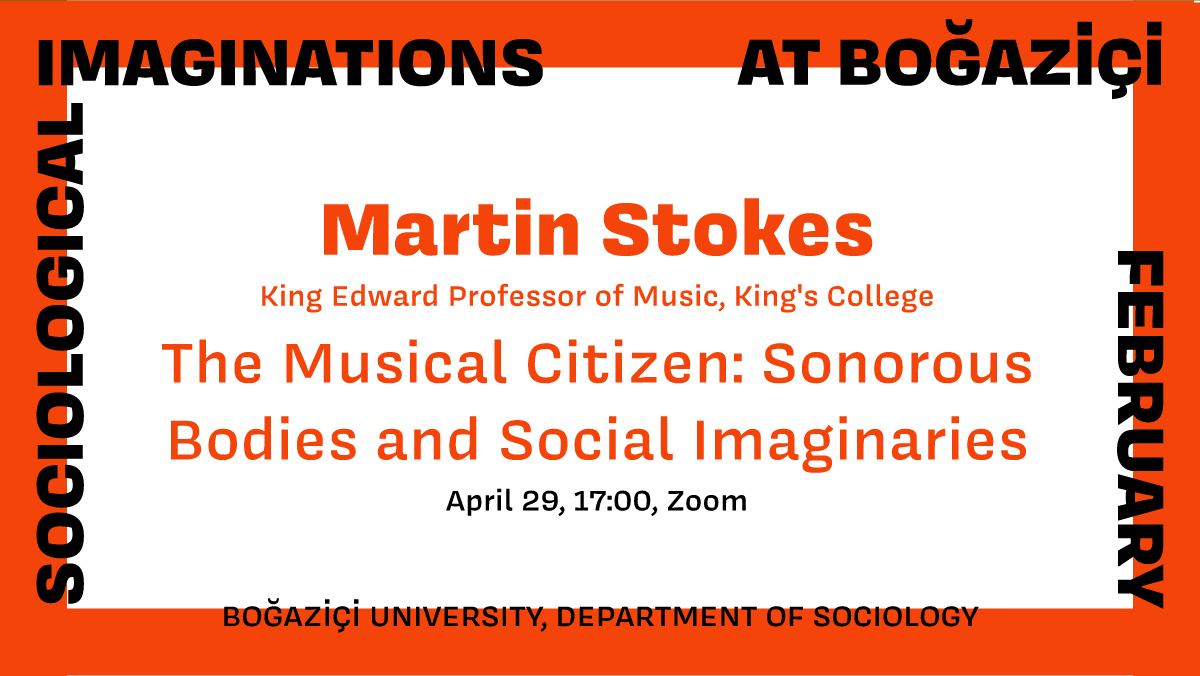 The Musical Citizen: Sonorous Bodies and Social Imaginaries:
The making of citizens in and through music is a 19th century commonplace. But the ground of this longstanding musicological discussion has shifted with globalization, mobility and the parlous condition of nation and state today. What does it now mean to label a musician an 'ideal citizen'? And why are the examples that would now spring to mind such complex and puzzling figures? My talk will look at the question of musical "multi-citizenship in multiple places" (Parlati/Chamoiseau) from a postcolonial perspective. I will reflect on Turkish crooner Zeki Müren and French-Lebanese slam poet Marc Nammour – and the grounds they might provide for reconsidering the familiar myths of the citizen composer.

Martin Stokes is the King Edward Professor of Music at King's College London. His books include The Republic of Love: Cultural Intimacy in Turkish Popular Music and, most recently, Theory and Practice in the Music of the Islamic World: Essays in Honour of Owen Wright (with Rachel Harris). He has also taught at Queen's University of Belfast, The University of Chicago, and Oxford, and is honorary professor at The University of Copenhagen. He was a visiting associate professor in the Sociology Department at Bogazici for the summer programme in 1996 and 2006. 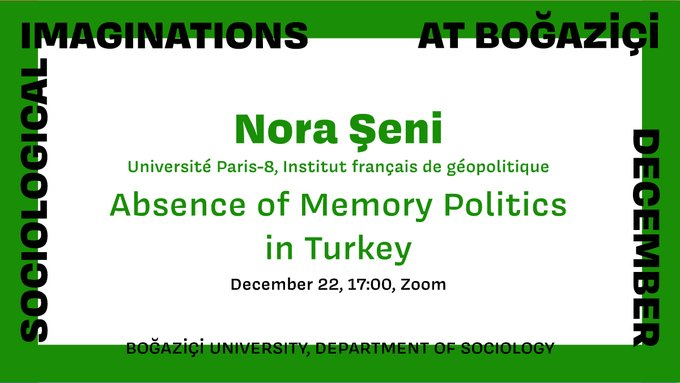 After Second World War and particularly after the decade of 1970 memory issues became important elements of public policies, domestic and international. As a result, the strategies resulting from arbitrations and balances between plural, competing and conflicting memories are elements of contemporary politics and geopolitical issues. In the post-Holocaust (but I will use the word Shoah and will explain why) European picture, Turkey is one of the countries that remained neutral and, on whose borders, the SWW came to an end. Not having participated in it, and for reasons that have to do with its own history, Turkey did not “feel” concerned by the major questions and existential doubts as a civilization that the discovery of the death camps has addressed to Western civilization. Turkish intellectuals, artists and scholars remained foreign, indifferent, as much to the dread and dismay as to the doubts and debates aroused in Europe at the end of the war. From this point of view, Turkey and its elites remained outside what became European identity, its sensibility and culture after World War II. I will discuss the mechanisms and consequences of this “externality” of the Turkish educational, intellectual, artistic and media world on the political evolution in these last decades. 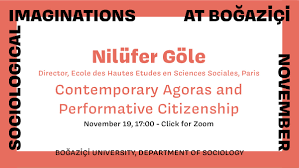 Acting collectively while expressing singularities is a quintessential question for contemporary agoras. A new form of public agency announces a paradigmatic change in politics. It is around this hypothesis that I propose thinking about the public space as a protagonist of politics. Public space movements bring forth the contribution of the personal and the intimate forms of life to the production of the common. Public space offers visibility to actors, expressivity of singularities and transformation of the individual in and by the collective. There is an implicit promise of changing the premises of liberal societies based upon individualism. Assemblies in public can be said to heal the separation of the individual from the collective, leading to the elaboration of a new historical subject, enacting ways of "becoming person in public" that cannot fully be grasped within the paradigm of modern individual. I argue therefore that reclaiming public space opens up new possibilities in the organization of human condition, and configures new articulations between subjectivity and collectivity, between assembly and creativity.

Nilüfer Göle is currently Director of studies at Ecole des Hautes Etudes en Sciences Sociales, (School of Advanced Studies) in Paris (2001-). Previously, she was a Professor of Sociology at Boğaziçi University in Istanbul (1986 to 2001). She works on Islamic visibility, secularism and intercultural controversies in European public spheres. Her sociological approach aims to open up a new reading of modernity from a non-western perspective and a broader critique of Eurocentrism in the definitions of secular modernity. Her research project, (Europublicislam), on the transformations of European public sphere was funded by European Research Council (2008-2013). Her current program of research is on Public Space Democracy and she is the founder of Agor Akademi, a creative inquiry for Public Space (EHESS-Nomis Foundation). Her books have been published in many languages, French, German, Turkish, and Polish. She is the author of The daily lives of Muslims: Islam and Public Confrontation in Contemporary Europe (Zed book, 2017), Islam and Secularity: The Future of Europe's Public Sphere (Duke University Press, 2015), Islam and Public Controversy in Europe (Ashgate, 2014), The Forbidden Modern: Civilization and Veiling (1997). Her book, The Daily Lives of Muslims received the prize for the "best book on Europe's future" given by European Solidarity Center in Gdansk, in May 2017. (https://nilufergole.wordpress.com/)

ABOUT THE SERIES
Sociological Imaginations at Boğaziçi is dedicated to exploring contemporary issues with scholars and intellectuals whose paths have crossed with the department over the years either as students or lecturers. We believe bolstering a dialogue between the academia and the general public becomes more urgent in times like these when the consequential relationship between personal experiences and the wider society has become more evident rendering sociological imaginations more indispensable. It is in this spirit, the Department of Sociology is hoping to create a medium and space that unites a forum of contemporary public debate with the Department's reflections on the past and present of its intellectual depth and diversity, hence providing a fresh connection to its lineage.

Here is the link for the previous episodes in the series:

If you miss the lectures in Sociological Imaginations at Boğaziçi, you can find their recordings here.