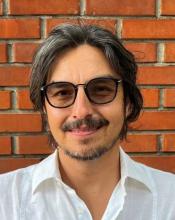 Saygun Gökarıksel's research and writing engages the themes of law,  history, and politics, especially the field of transitional justice and human rights, from a critical legal and political anthropological perspective. His current research examines the legal and moral-political reckoning with the communist past in Poland and Eastern Europe more generally, with a focus on violence, archive, memory, and neoliberal and rightwing authoritarianism. His writings and commentaries have appeared in journals and forums across Eastern Europe, the Middle East, and the US.

“Screening the Criminal Underworld of Capitalist Nation-State Making: Dogs and Memory of the 1990s in Poland,” forthcoming in Remembering the 1990s: Economic Change in East-Central Europe and Beyond after 1989 edited by Veronika Pehe and Joanna Wawrzyniak. Routledge.

-- “Anti-Fascist Strategy Today: Historical Lineages of Anti-Communism and “Militant Democracy” in Eastern Europe.” In Back to the 1930s: Crisis, Repetition, and Transition in the 20th and 21st Centuries edited by Jeremy Rayner, George Souvlis et al., Palgrave, 2020, 215-233.

-- “Facing History: Sovereignty and the Spectacles of Justice and Violence in Poland’s Capitalist Democracy,” Comparative Studies in Society and History, January 2019, 111-144