Screen Shots: State Violence on Camera in Israel and Palestine 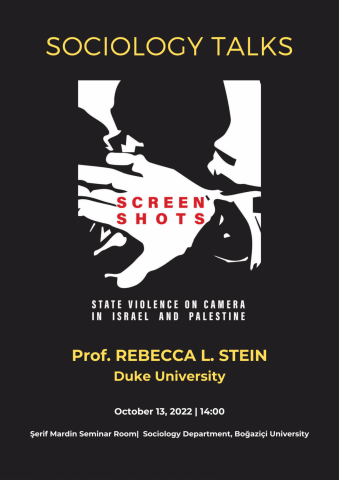 Professor Rebecca L. Stein will join us with a talk titled “Screen

Shots: State Violence on Camera in Israel and Palestine” on October 13, 14.00. The talk will take place at the Sociology Department, in Şerif Mardin Seminar Room.

Screen Shots: State Violence on Camera in Israel and Palestine

In the last two decades, amid the global spread of smartphones, state killings of civilians have increasingly been captured on the cameras of both bystanders and police. Screen Shots studies this phenomenon from the vantage point of the Israeli occupation of Palestinian territories. Drawing on ethnographic work, Rebecca L. Stein chronicles Palestinian video-activists seeking justice, Israeli soldiers laboring to perfect the military's image, and Zionist conspiracy theorists accusing Palestinians of "playing dead." Writing against techno-optimism, Stein investigates what camera dreams and disillusionment across these political divides reveal about the Israeli and Palestinian colonial present, and the shifting terms of power and struggle in the smartphone age.

Rebecca L. Stein is Professor of Anthropology at Duke University. Her research focuses on linkages between cultural and political processes in Israel in relation to its military occupation and the history of Palestinian dispossession. She is the author of Digital Militarism: Israel's Occupation in the Social Media Age  (with Adi Kuntsman), on the militarization of social media in Israel; Itineraries in Conflict: Israelis, Palestinians, and the Political Lives of Tourism (Duke University Press, 2008) which considers the relationship between tourism, mobility politics, and the Israeli-Palestinian conflict; and the co-editor of Palestine, Israel, and the Politics of Popular Culture (Duke University Press, 2005) with Ted Swedenburg and The Struggle for Sovereignty: Palestine and Israel, 1993-2005 with Joel Beinin (Stanford University Press, 2006).